The Mighty Kronos Sparta - Ancient By Name, Perfect By Reputation 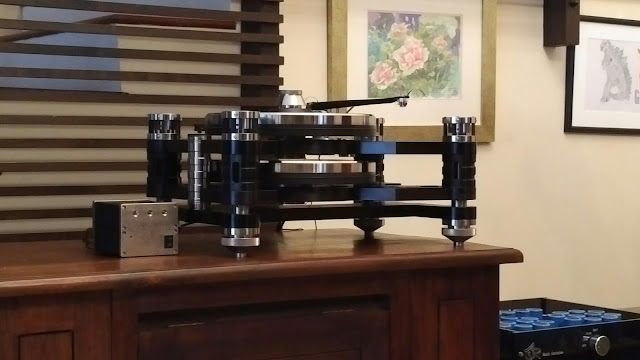 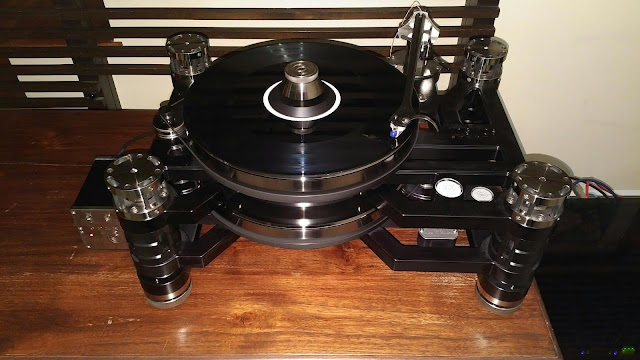 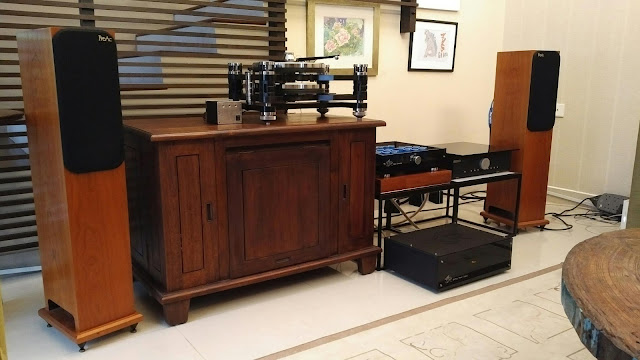 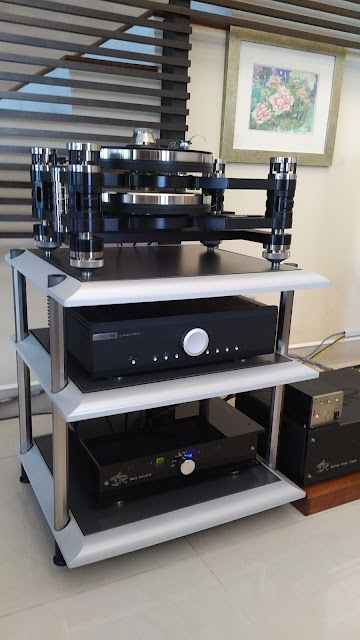 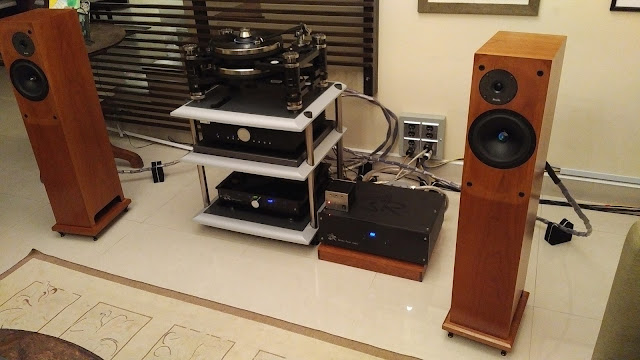 When Victor Pheh of HiFi Creations offered me to review the Kronos Sparta, I was not sure to accept the offer or not. Mainly because I was concern that my set up will not be able to reveal the Sparta full potential, especially in the phono stage section of the system. Nevertheless, Victor was willing to assist in ensuring that the Sparta full potential will be revealed in my system.

My initial intention to review on how flexible the Sparta is to blend in to a mid level set up changed into a journey of enhancing my listening pleasure. This review will have two sections; first based on a fully enhanced set up and environment. Second will be based on my standard inhouse set up.

To further unleash this beastly TT, the following was included in my set up:


Standard In House Set Up

I believe 2015 was the year that TT was redefined as Kronos :). They did win the most number of awards globally. Its dual platter; rotating opposite each other engineering design is one of those that anyone can easily hear the impact of it. To me personally, it is the quietest TT that I have ever heard and the sexiest looking design. I don't intend to bore readers with its technical specs as it can be found at their website. Click here. Just look at how sturdy the unit is in the video below.

So, what does Kronos stands for? KRONOS (or Cronus) was the Titan god of time and the ages, especially time where regarded as destructive and all-devouring. And trust me, this is one TT that deserves to be worshipped.... in a non biblical sense of course.

The unit came in one piece except for the Helena Tonearm (equipped with ZYX Premium Omega MC Cartridge) which was carried separately. Setting up this two tier TT was straight forward. The tonearm is a uni-pivotal design with the counter weight was under slung below. The power supply cum speed controller is in a separate; small rectangular box. Beautifully finished to match the classy but modern looking TT. One must use the + or - switch to ensure you get the precise 33 1/3 or 45 rpm speed. This unit also comes with a strobe light and the middle of platter, the speed disc is also a part of the platter. 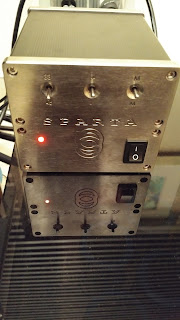 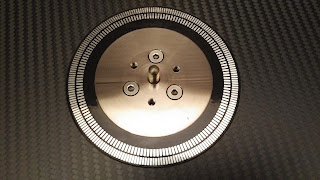 The sturdiness and stability that the Sparta shows is really something that has translated into sonic benefit for the TT sound creation each time it spins an LP. The design of the pillars itself allows the user to manually adjust the levelness of the unit in which, the stability gauge is also incorporated onto the structure of the body. 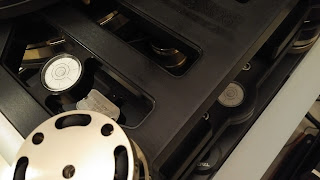 The record clamp is also included and it is designed to be tightened during usage or not. I prefer the latter. 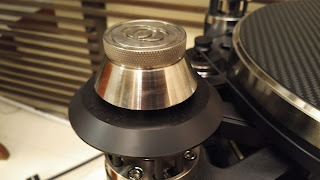 The Sparta was so much fun to listen to that I just can't stop spinning various music genres. The first few days was just easy listening i.e. just throw in any type of music to get accustomed to the sound signature. However, in the end, I settled down with the following tracks to test Sparta true ability.
The Session (Enhanced)

The guitar intro on Tears in Heavan sounded so crisp where each string was delivered in a balanced presentation between the high notes and low notes. Eric's vocal came out to be quite deep and emotional with a big, bold but still lively presentation; fits the definition of a live concert. Clarity was definitely the first virtue of Sparta that was very evident. The different layers of guitar, soft bass and backing vocals were easily identified and it gives the listener an idea of how the musicians were positioned during the concert.

Dire Strait's magical track on MTV was the most entertaining track. One of those that you just need to crank up the volume above your normal listening level. Sparta delivered the vibe form this track that makes you feel the soul of the music. It sounded big. A little someone was quite surprise how big the sound can be from the ProAc D18, including myself. For me, there were moments where I went 'Hey, I have never heard my ProAc sounded like that before'. The drums on this track was solid as the thud thumping intro gave me quite a hard hitting bass kick. It dug really deep when it comes to low frequency notes. The growling guitar riffs was also very involving. Overall, there was good balance between sufficient bass, sweet mids and lively highs.

My Hero by the Foo Fighters is a track that can truly test the bass delivery of the Sparta. Not because it digs deep to very low frequency, but because of it complex beat, courtesy of Dave Grohl's brilliant arrangement. The drum intro sounded solid especially the snare. The crash cymbal also sounded very crisp and when the shredding guitar comes in, the whole song sounded even more energized.

In Era Gia Tutto Provisto, the soft piano intro sounded mellow but full of emotion. But when Andrea's vocal kicks in, his voice sounded fuller and deeper than ever before that it feels like the music wraps all around you. Even when he hit the high notes, it was still delivered in a very enveloping and musical way. The little percussion on this track was well presented that the tom toms sounded extended, very suitable for this track.

On Take Five is where I said to myself - Perfect! Exaggerating as it may sound, I truly feel that on this track, the Sparta shines out it true colours. Some say I must have better amplification and bigger speakers to really allow Sparta to shine but to me all that is relative to your room size. Every hit of the drumstick on the crown of the ride cymbal was crisp and projected a very high level of detail. When the sax kicks in, it sounded big and airy that you can listen to its deep air flow when it hits the high notes. I attribute this to Kronos Sparta ability to run so quietly that the every detail of this track just emerged as it should be. Less noise, more music. Thats what matter.

Now bringing on Metallica's version of Last Caress. I have been struggling to find a TT that can deliver heavy metal and rock music that can really kick in the adrenalin in me. On this track, the Sparta sounded like a heavy metal beast. James vocal sounded a bit thin but thats how James sing on this track. Kirk's guitar sounded really heavy with that rawness of jamming in the garage. The Sparta also can really reproduce the drum beats from this track precisely in such detail. The sound of the hi hat was sharp yet blends in nicely with the lead guitar and bass.

Just to further challenge the Sparta when it comes to speed and precision, I put on Catatonia by a local outfit Sil Khannaz. Lan's high speed snare hitting and double paddle on the kick drums sounded very bold, energetic and yet very detail and not mumble sounding. Given the wrong TT, this is usually the case when one put on a death metal track. The overall track was well reproduced by Sparta where again, quite neutral. Sufficient bass from the heart pounding double pedal, excellent pace with the guitar and a bewildering clarity for the growling vocals. Very unorthodox of me to test the Sparta with a death metal piece. I dont know any other review who listen to death metal but hey, the arrangement of this genre is complex, speed is intense and the good Sparta delivered music to my ears anyway.

The last track I tested the Sparta with was with one of Ennio's masterpiece - Gabriel's Oboe from The Mission OST. The Sparta delivered the masterpiece with passion. The sound stage sounded big and at the same time it wraps the songs around the listener.The layering of different instrument was evident where arrangement of the music delivers different level of depth.

After enjoying a full fledged enhancement in my set up, I reverted to my own set up with the exception of power cabling upgrade. Apart from that, the only new element is the Sparta itself. The idea was to see whether the Sparta is flexible enough to be integrated into one's existing set up, particularly the phono stage.

The biggest change I heard was the lost of details on certain test tracks above. While music such as My Hero can still be delivered with the had hitting drums and guitars, tracks like Gabriel's Oboe and Take Five, lost a little bit of its emotion where the low end notes does not dig deep as before. Mids was still good but the highs can sometimes sound a bit restrictive. I believe my MF M1 ViNL phono stage may be the bottleneck that is now allowing the Sparta to deliver the same experience I had with ASR phono stage. However, did the Sparta fits well in my set up. The answer is still YES. As oppose to my Clearaudio Concept, Sparta has open up a different and more energized analogue sound to my system. My ProAc D18 sounded fuller and bigger with more music is coming through with Sparta low noise design.

Really want to hear your LP sing? The Sparta can provide you with an experience that may make you tell yourself - That song did not sound like that before or I never knew my speakers can do more. For someone with an entry to mid level set up, the introduction of Sparta into your system  will bring your system a few notches higher than before. If you already have a decent enough phono stage, it will be even better.

On its own, the Sparta is definitely one of the 7 Wonders of the World..... HiFi World of course. Every single award Kronos has won in 2015 is well deserved for its unique engineering design that really deliver the result of making your LP sing. It delivers the music as it should be. Rock and metal can be a challenge but the Sparta can easily overcome that given the proper set up by the specialist. Lower noise plus the effect of dual platter with opposing rotation equals to a turntable that deserves to be set up on a shrine. Perfect in every sense to me. Beautifully designed physically, backed up with proper engineering and equipped with all the necessities to spin LPs. On sound, its about details in musicality, sufficient and balanced delivery of a wide frequency spectrum and reproducing the music as what the artist intend it to be heard.

Kronos products is distributed solely by HiFi Creations. For a demo or purchase, please contact Victor Pheh on 012 2962799.

El Hefe
Malaysia
El Hefe is an O&G engineer who dreams of spending all his time listening to hi-fi without worrying about the rest of the world. He longs to own a hi-fi shop but is too afraid to start one as he fears he will end up listening to the equipment rather than selling it. He is easily poisoned by any new hi-fi gear, gadgets and technologies, especially Apple-based. In the past year, El Hefe has succumbed to the melodic sound of the black disc and sometimes prefers headphones rather than those huge thingamajigs they call loudspeakers. El Hefe also writes for audiofi.net and novohighend.com based in Canada.

After the 2022 Munich High End HiFi show, I took a few days break in Munich and Stuttgart before Isaac, Kenny and myself flew to Aalborg, De... 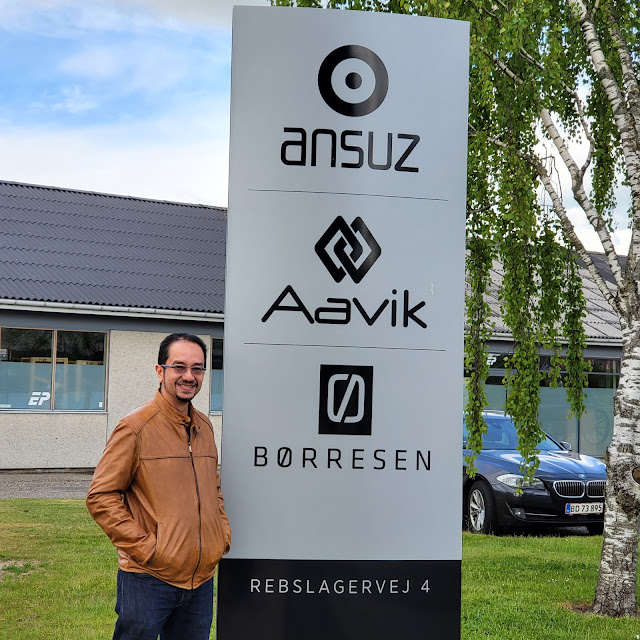