As mentioned in my previous post, I will do a simple review of this old-ish unit that I stumbled upon  Mr. Drife's blog. I now call this unit old-ish rather than old as apparently there are even people still using their CD player from 1988. So mine which was purchased the first time in 1999 is still considered 'young'

I have been trying to get a hold of this unit for a few years now after selling it off during my student years in the UK due to shortage of money. Yes, lots of people questioned me on why am I spending my small amount of scholarship money on hifi while I should use it to but books. Well, I worked part time on weekends and bank holidays, making doughnuts in the famous Brighton Palace Pier to cater for my hifi interest. Plus, I play drums for a local band  for that few extra quids.

Anyway, at one point, I stopped working as it was in my final year in university and just concentrated on the books. Due to shortage of money to ship back my stuff to Malaysia, I started selling some of my stuff and it included this CD player.

So, a BIG THANK YOU to Mr. Drife for finding my old flame. And sorry I didn't recognise you initially. (Mr. Drife actually have bought a hifi kit from me once but it took me a few minutes before realising I have met him before hehehe)

Sony had 2 different series in their hifi components; QS and ES which the latter is its higher end series. But rest assured that even the QS is built to a high quality standard. At those time, Sony units can easily match other CD players in the likes of Marantz, NAD, ARCAM etc.

It weighs 6 kg and built with all metal casing. All its connections, buttons, the famous jog dial and tray mechanism are sturdy and have an expensive feel. The LCD display is one of the best out there. Crystal clear, simple, intuitive and fuss free.

The tray mechanism is the one that really impresses me. Its bigger that other normal CDP as it has to accommodate the magnetic puck on top of the CD as well. But, even with ths size and extra weight of the puck, it is sooooo silent. Even after all these years. 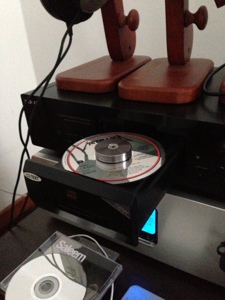 The unit came with a full remote control which is still working. However, I am currently using my Sony MD remote to control this unit as well. 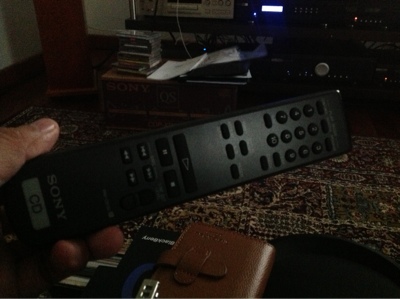 The power cable I believe have been modified by the previous owner as it is now equipped with an IEC connection so one can start using different power cables. I remembered the original unit I owned came with a built in cable. 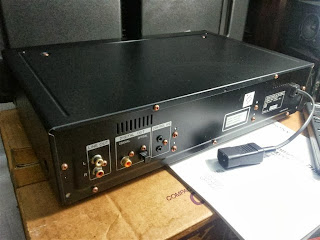 At this price point (at least in late 90s), there was only outputs:

There is also a Control A1 input and output. This is mainly to be connected to other Sony products for seamless control. I use this with a mono cable connected to my Sony MD player. With this, both unit will be synced during digital recording and if there is a CDText on the source CD, it will automatically transferred to the MD, so no need to type out the tracks name onto the MD.

Tracks that I used to review this unit....were tracks during my students days in the UK:
1. Gangsta's Paradise by Coolio
2. The Circle by Ocean Colour Scene
3. Breathe by Prodigy
4. Cosmic Girl by Jamiroquai
5. Ocean Drive by Lighthouse Family
6. No Woman No Cry by The Fugees
7. Return of the Mack by Mark Morrison
8. One by Metallica

If anyone of you were into these tracks, you might know that I was using the Brit Awards 97 double CD compilation for tracks 1 to 7.

SETUP 1
I wont be giving track by track review...but more on a collective overall listening pleasure/displeasure. Most of the track are quite bass heavy and thats exactly what I got from this Sony unit. Connected directly via RCA IC, the overall sound was leaning more towards delivering a very strong and upfront low end character, more than the usual I experience with CD players fed through the MF M6 DAC. The Breathe track in particular made me went into a rave clubbing mood. I have programmed the Sony CDP to play these tracks on random repeat. As I keep on listening, it started to grow on me, giving me memories of my college days...blaring loud music and annoying neighbours hahahaha. It was still on the bass heavy side but it was still OK and pleasurable experience. Listened to these tracks for about an hour then I switched  to SETUP 2.

SETUP 2
Connecting the Sony unit to M6 DAC injected a more refined and controlled bass on these tracks. It was not as overwhelming as when it was played via RCA. However, it has made those heavy bass tracks NOT to sound as they should. Although it was a more relax and warm sounding, it took away that adrenalin I got from the RCA set up. Is the M6 DAC incompatible with a Sony transport, SQ wise? I then put on One by Metallica...My my my...this was a different beast. It made me turn on my Yamaha DTXplorer drums at 2 am in the morning....playing along to this track.  I continue to listen via the M6 DAC for about an hour...and yet again...the sound just grew on me and I started to re-appreciate the experience. So how does it compare to my MF CDT transport?

SETUP 3
Now, playing these tracks again over my MF CDT, I am surprise to hear that although I am using the same coaxial cable, feeding into the same DAC, the sound character was still different. MF CDT uses slot in mechanism while the Sony uses a tray and puck. I bet its because of the different transport design, the sound is also different. Compared to SETUP 2, the MF CDT compliments more the M6 DAC as it provided the balance between highs and lows and still deliver that extra adrenalin to make the music more alive.

1. The Sony still gives me that satisfactory feeling and the adrenalin to appreciate hard hitting, bass heavy, guitar growling music. The 2 best tracks that I like listening from the Sony were One and Ocean Drive. Excellente!

2. New always better than old? Not necessarily. I still believe that in any case, system matching is still important. Previously, I use the Sony with Marantz PM57 driving Heybrook Optima and soon after MF X-A1 driving TDL RTL3SE and both yield excellent results. The Sony directly connected to M6i amp delivered a little bit more on the bass but it still was sweet sounding. The M6 DAC helps a lot in controlling that extra bass.

3. Transport matters! The 2 different transport mechanism gives different sound through the same DAC. Of course, I am sure the different type of lenses used in both transports play an important rule too.

So, which one will stay as my resident CD player? Both at the moment. Until I find myself a Marantz PM57 and replace the tweeter on my old TDL RTL3SE.

Here is Ocean Drive, played from the Sony RCA hook up.