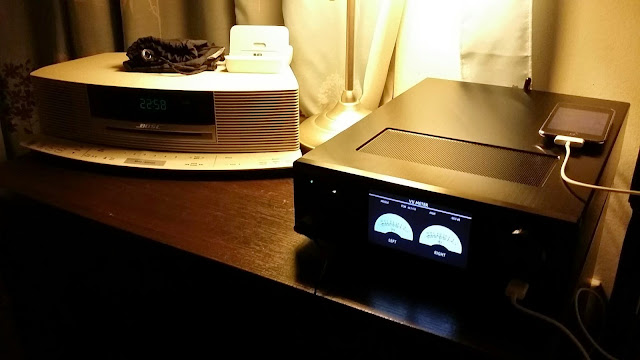 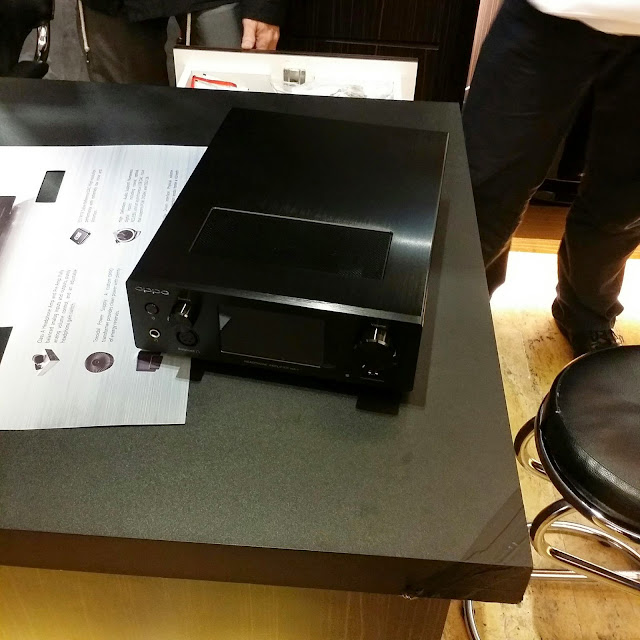 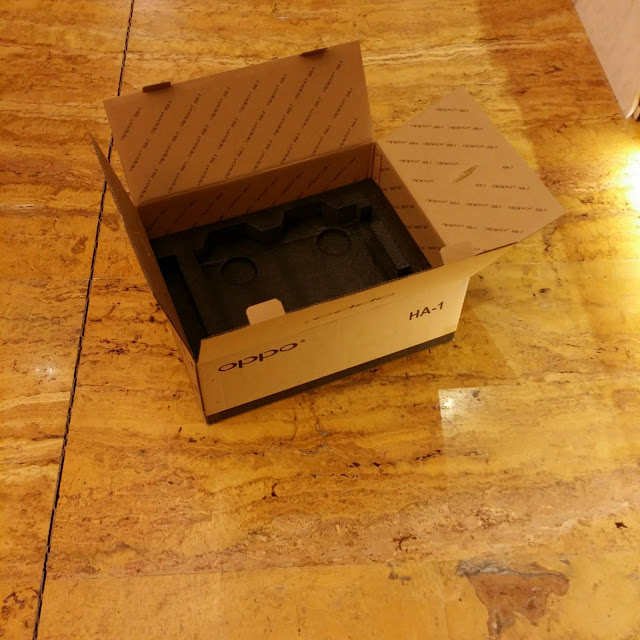 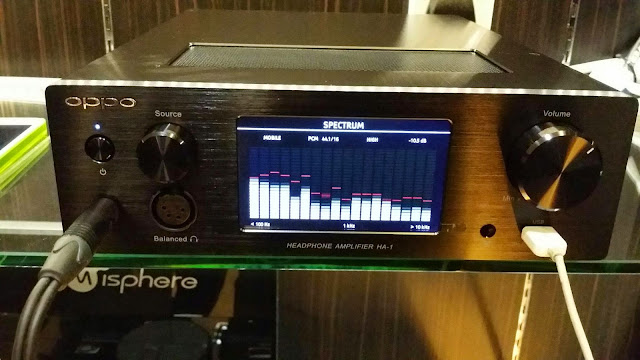 As far  as I can remember... the 2 items I had to really wait for its debut were the Musical Fidelity CLiC and also the M6 DAC. But then comes this Oppo headphone amp. Another well publicised hifi gear even before it came into production. Well at least here in Malaysia. I have been reading about the item for over a year I think from international forums etc...and in July this year, I got to listen to them for the first time during the KLIAV show. But sad I was when Oppo rep said that the item will only be available by end of July....

And... end of July became mid Aug.... and mid Aug became 24th of Aug. Along those time, I requested directly from Steve Chua of CMY OU to reserve one for me and inform me immediately once the unit is available. And he fulfilled his promise..... Not even by 24th.... he messaged me in the morning of 21st Aug.... and with the blessing of the Home Finance Minister.... I went straight to his shop after work.

Didnt even bother to bring it home. Immediately asked Steve and Ting to unpack in the shop to have a listen to it.

As I was not planning to buy the headphone itself, I tested it with Beyer Tesla T1.... which I purchased about a year ago from CMY as well. Put on Metallica Enter Sandman..... and the HA1 just started singing melodiously with tight bass from Lars's drums. And it sounded very spatial.

Not to mention that the display graphics when you turn it on is so sexy.... will load a video of it soon.

It is relatively a heavy unit weighing at about 6 KG unboxed. Sturdily built and beautifully finished in black metal casing....apparently it comes in silver as well... but black is sexier.

There is grill on top of the unit to dissipate heat as this is a Class A amp, it does get a bit hot.

The LED display is to die for. Crystal clear and modern. Brightness can be dimmed and fully turned off as well.

The sockets for digital/analogue inputs and outputs are quite standard. My QED RCA and digital cable can be snugly fitted. I particularly like the 'mini' antenna for Bluetooth. Usually on other products, the antenna is longer than this even on Oppo BD player.

The power cable is also a bog standard cable but be warned.... similar to its BD player, it comes with a US plug. So make sure you have an adaptor to our local 3 pin  plug.

The front fascia is neatly laid out with soft touch power button. The LCD screen is not touch screen as my 1.5 years old boy gets frustrated  as nothing happens when he touches the screen heheheh. The volume and input selector is nicely sized for ease of operation and maintain it sleek look. 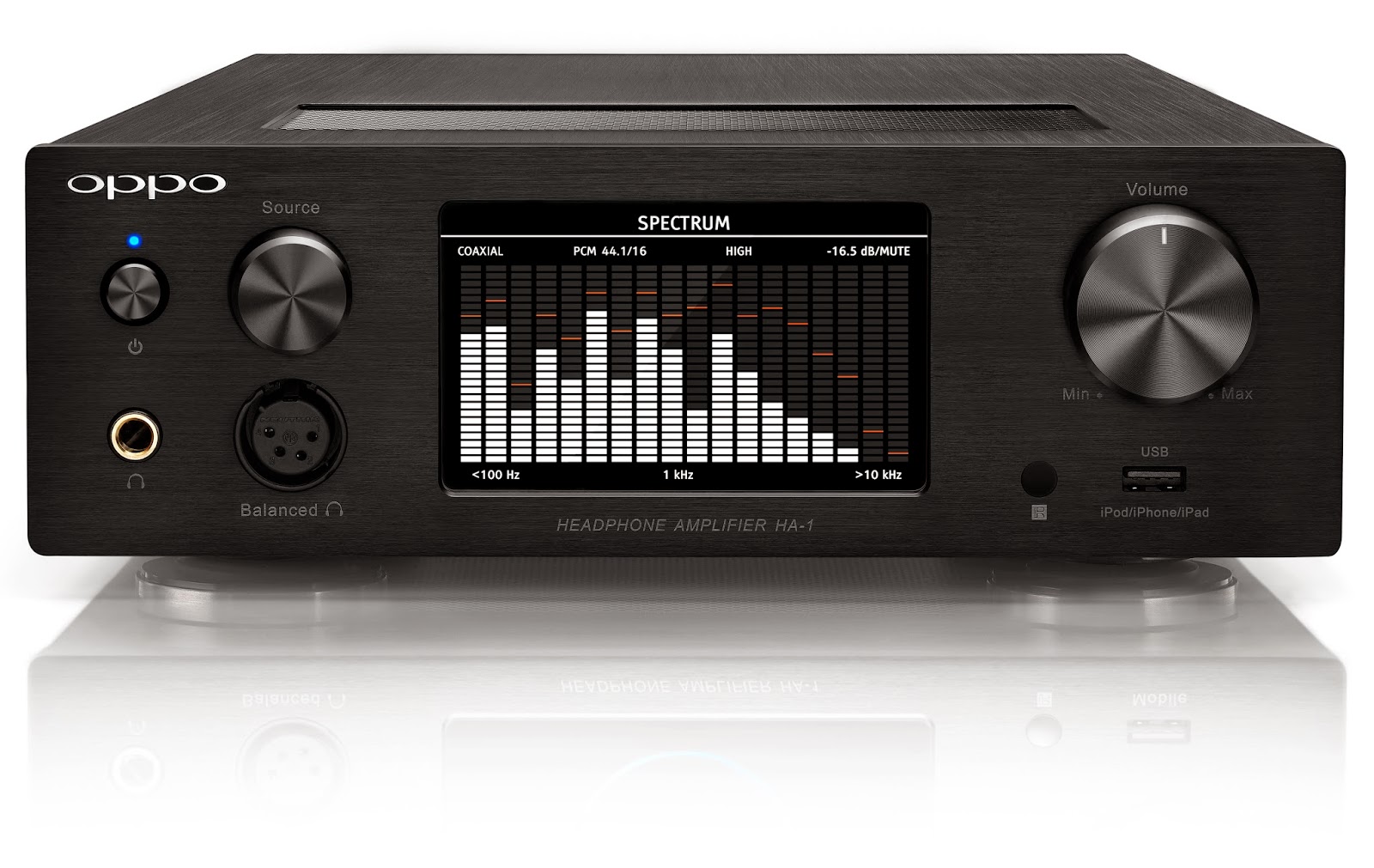 The ipod/ipad/iphone USB cable also fits snugly into the USB port.... however, I prefer the port to be at the rear as once you have the cable inserted, it can be a bit extrusive. Not nice.

The remote control is nicely designed too with all the main function is available. 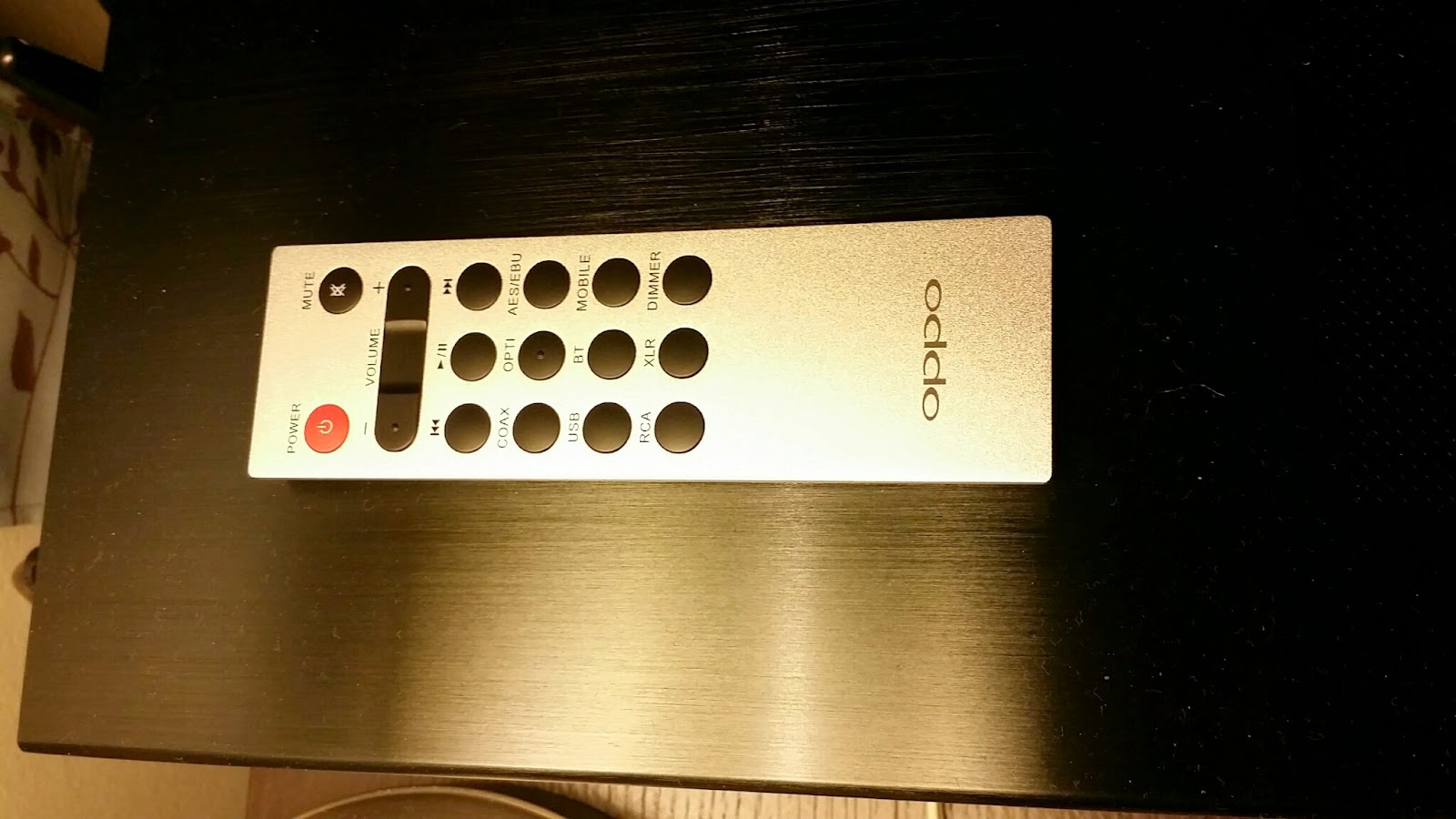 Where do I start? One word to sum it up; Aplenty...

Do note that 2 headphones (balanced and unbalanced) CANNOT be driven together simultaneously.

I am not going bore you readers with the full specs details as it can be found here Oppo HA1 full specs.

However, one of the most impressive spec is the DAC. Oppo deploys the ESS Sabre32 DAC chip. Quoted from Oppo's website:

The SABRE32Reference ES9018 from ESS Technology is the world’s best performing 32-bit audio DAC solution targeted for high-end consumer applications and professional studio equipment. With the ESS patented 32-bit Hyperstream™ DAC architecture and Time Domain Jitter Eliminator, the SABRE32 Reference DAC delivers an unprecedented DNR (Dynamic Range) of up to 135dB and THD+N (Total Harmonic Distortion plus Noise) of -120dB, the industry’s highest performance level that will satisfy even the most demanding audio enthusiast.

Other features include ability to dim the display out completely, or one can choose to display either the source input details, VU meter or graphic equaliser and also an Android/iOS app to control the whole unit via bluetooth. 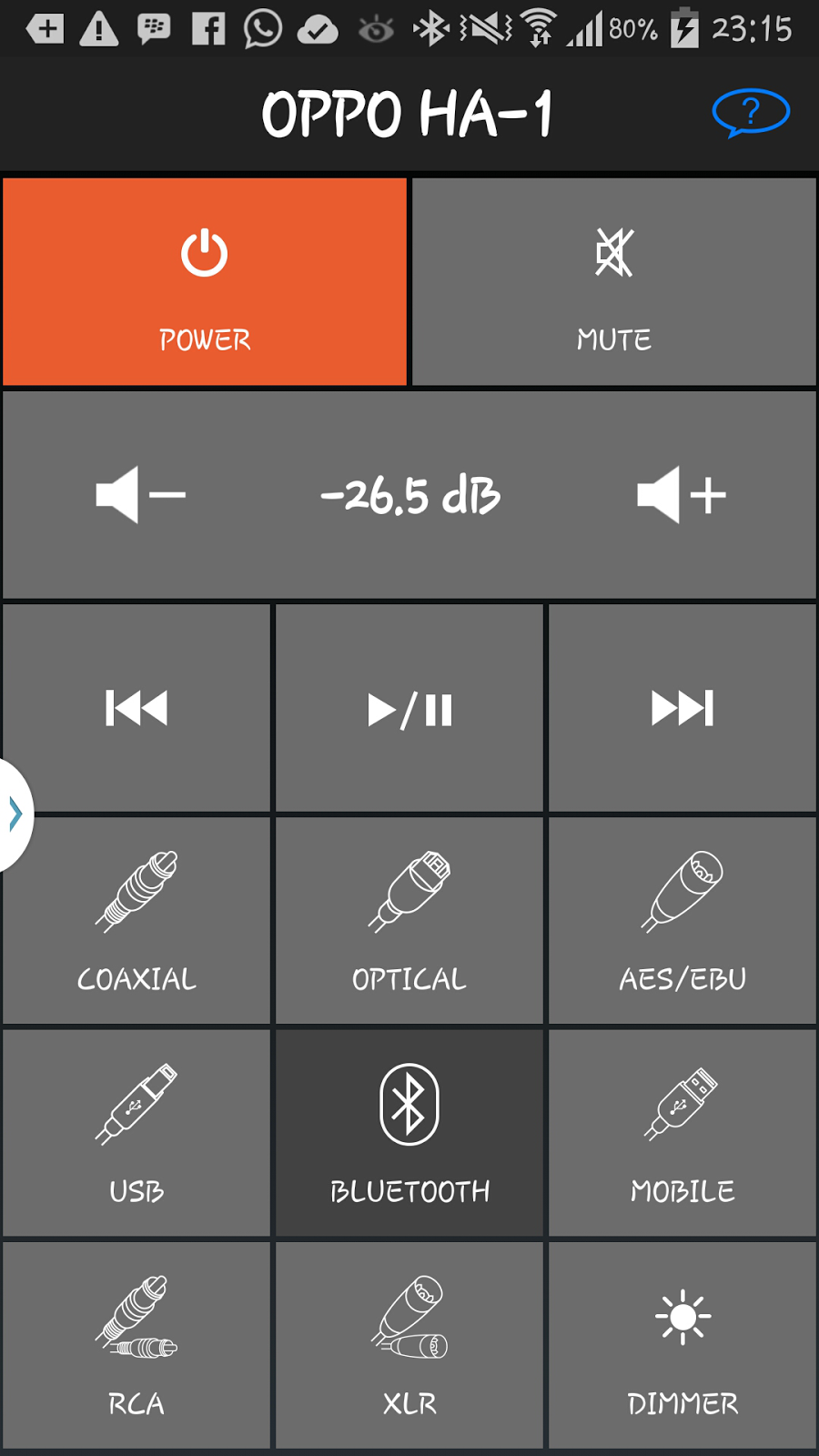 The bluetooth can easily be connected. After the first pairing done, the HA1 will automatically connect to any phone or tablet via BT once it has been fully recognised. And of course, no signal drop experienced so far. It will also detect if the unit connected to the HA1 is AptX enabled or not.

For the sake of simplicity, this review is only based on the Beyer T1 with a few comments on pairing of the other headphones.

The bass/tom2 sound from the intro of We Are Young sounded solid with a real thumping experience. Not overwhelming while the vocals seems to give quite good clarity. The mids are a bit on the mild side but the highs were well presented. However, the overall song sounded a bit un-lively.
On Tidurlah Permaisuriku (Sleep My Princess) by Malaysian legend Jamal Abdillah, it sounded very natural and melodious. A very soothing experience listening to this song with Jamal's vocals being the centre stage. The presentation from paring the T1 with the HA1 provides the listener a sense of space surrounding the track. The right amount of bass, mids and highs.

On Metallica's rendition of Whiskey In The Jar.... This is the track that got my adrenalin pumping. The guitar riffs on this track sounded really solid and tight. James's vocals also sounded very powerful and energetic. The drums and bass were presented in a very accurate timing. It gels perfectly with the overall track presentation which I can sum it up to be bold.

On Era Gia Tutto Previsto..... the intro was really mesmerising and sounded really lively. Andrea's vocals was very boldly presented with such strength. It was balanced with a terrific quality of the musicians backing him up. And of course the string works flow fluidly across the amp and T1 headphones. This was indeed the highlight of the session.Such a lively and uplifting experience. Had to repeat the track to enjoy the the well balanced track

Played a few more tracks with mix results and depending on the source, some of the tracks can sound a bit un-lively but when it shines, it can really push my T1 to its max capability.

Using the Alessandro Grado and BOSE, the HA1 had no issues driving any one of them. Even the BOSE sounded lovely via this unit.

It is indeed a well built and well thought machine. From its features and compatibility of various headphones, it can easily be the dream of many head-fiers.

Is it an all rounder? I don't think so. There is still some lacking in the warm department and it heavily depends on the quality of the track as well. I played the tracks above again via my resident headphone amp, the Bryston BHA1 and it pointed that the Oppo amplifier was missing the warmth that I get from Bryston. It is a hard hitting high quality amp with a very capable digital side all in one box. But thats it, it can sound a bit too digital.

It is still a great buy at its price of RM4566. For anyone interested to purchase of have a demo, please contact Steve Chua at CMY One Utama. 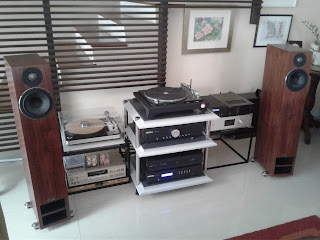 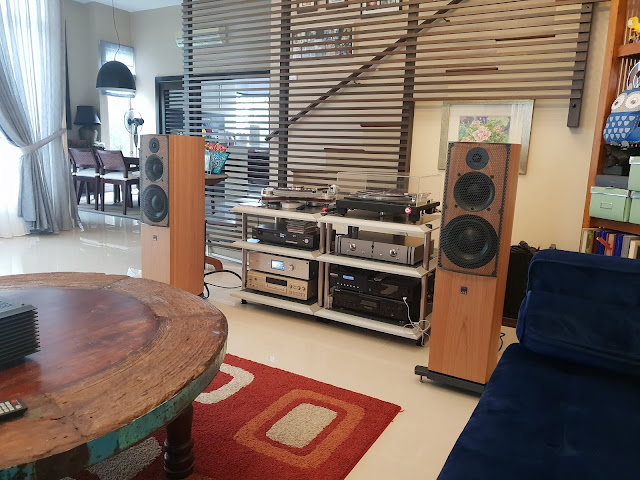